Here you will find information on the aquatic plants of Lake Geneva.

The underwater plants of Lake Geneva are often wrongly referred to as “algae” – but what are they really?

There are several different types of aquatic plants in the lake. These are the main groups:

Algae are usually single or multi-cellular organisms, barely visible or completely invisible to the naked eye. They can only be identified with a microscope or a magnifying-glass. Generally they belong to the group of ‘floating’ organisms normally called plankton or phytoplankton (plant plankton). There are also similar types of algae which grow on rocks or in sediment, or even on animals and other plants. 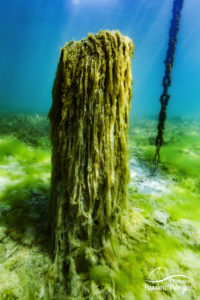 When the environmental conditions are right and the water is at the correct temperature and contains sufficient nutrients, some of these unicellular algae form colonies which can be several metres long and therefore visible to the naked eye. Other microscopic algae are multi-cellular and can either be attached to a substrate or floating freely in the water.
When the concentration of cells of phytoplankton is extremely high, it can turn the water green, brown, or red  [1] , depending on the type of algae.
Algae are very different from other types of aquatic plants because they don’t have organ-growing tissue and therefore cannot develop stems and leaves, or produce roots to draw nutrients directly from soil. Algae also do not produce flowers but reproduce by budding, by fragmentation or sexually through male and female gametes.

In contrast,  aquatic plants  (or hydrophytes) are vascular (veined) plants with seeds and flowers which take root in the lake bed. They are an important element of the vegetation of the lake shores. Many species produce flowers which rise to the surface of the water during the summer and can easily be seen. This allows the seeds to spread through the air or by water, colonising other sites. These plants have a real vascular system with stems and leaves, and are generally more flexible than land plants because they develop in the water which surrounds them. 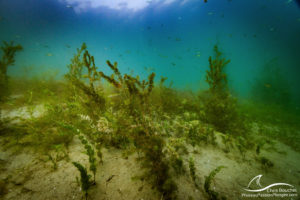 Characeae  are a different group of plants, a distinct type of macroalgae. They are the only surviving family of the Charales, an extinct order of plants with fossilised remains more than 400 million years old. Their cell structure and reproductive systems are similar to those of algae but they are also visible to the naked eye and possess rhizoids (filamental root hairs) which allow them to take root in the ground. 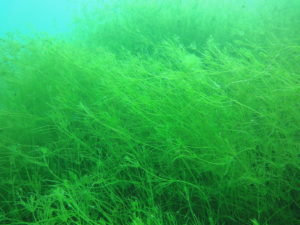 Bryophytes (aquatic mosses) are small plants with a stem and leaves. They lack real vascular or root systems, but do possess rhizomes, which allow them to root in sediment or attach themselves to rocks on the shoreline. 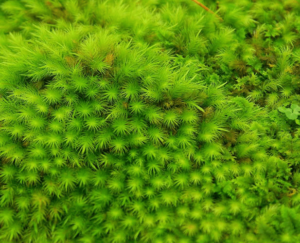 Together, these different underwater plants can form dense areas of growth like underwater meadows, known as ‘herberia’ or plant communities.

[1] Lake Neuchatel was temporarily (2020) invaded by an algae from the cyanobacteria family, commonly referred to as ‘The Blood of the Burgundians’, in reference to the local Battle of Murten, because it turns the water red. It is also poisonous, which meant that for a while it was impossible to swim in the lake.

Due to the presence of these underwater meadows, the area of the lake close to the shore is the richest area in flora and fauna of the lake, but also the most fragile. The complex biological system of this zone is essential for the ecosystem of the whole lake. Far from being harmful,  the herbaria is a source of food and shelter for many animal species,  as well as providing a place to reproduce and rear young for invertebrates (molluscs, crustaceans, insect larvae, etc.), fish (Perch, Pike, Roach …) and waterfowl, (Coot, Red-Crested Pochards, and many other kinds of duck).

In addition, aquatic plants produce half or more of our planet’s oxygen. This is mainly provided by phytoplankton: although it constitutes only 1% of the biomass of photosynthetic organisms on the planet, it is found in all aquatic environments around the world (rivers, lakes, oceans, seas, etc. ponds…)

From the late 1960s, Lake Geneva has suffered from significant nutrient pollution, especially from phosphates.   This caused an explosion of algae and other plants which blocked the light from entering the water and absorbed much of the lake’s oxygen when they decomposed.   Since the 1970s, there has been a sharp decline in the  diversity of aquatic plants. Many species have completely disappeared, and with them, several species of fish and invertebrates.

Thanks  to the lobbying of the ASL to ban phosphates in laundry products,  and force treatment plants to treat wastewater, the level of phosphorus in the lake has fallen and the eutrophisation (oxygen depletion) of the water has been reduced from 90ug / L in 1980 to 20ug / L today.   This has improved the transparency of the water,  allowing light to penetrate deeper and giving underwater plants a chance to establish themselves in the lower depths.   In recent years, characeae [1] have reappeared in substantial numbers, allowing fish species to return, including the pike.

The underwater meadows are a refuge for many species such as the pike, seen here. (Christian Witschard).

This large fish, a traditional emblem of Lake Geneva, is dependent on the characeae as a safe place to lay its eggs. In addition, its method of hunting is mainly based on the hiding places provided by other aquatic plants, such as the clasping leaf pondweed (POTAMOGETON PERFOLIATUS).

Improvements in the quality of the water have resulted in a steady rise in the variety of aquatic plants growing in Lake Geneva. As the range and diversity of the lake plants has increased, fish have also been able to return to the lake.
The underwater meadows are absolutely vital for the lake ecosystem and must be protected with the greatest of care.
Fishermen can help to preserve these zones and the fish who live in them by mooring outside them, and limiting the cutting of reeds or removal of vegetation.

[1] The presence of Characeae zones near the shore indicate good water quality (an oligotrophic environment), as these algae do not tolerate excessive nutrient levels (especially phosphorus).

♣ These species are listed in the ASL species identification sheets, which are (available in our shop)

Microscopic algae often have beautiful geometric shapes. Given the right conditions, they will form large colonies. They are part of the plankton group, the term for all the microscopic animals and plants that float in the lake and form the base of the food chain.♣

This is one of the most common plants in our lake. It is easily recognized by the heart-shaped leaves that surround the stem. It forms dense grass beds which provide an important place of shelter for young fish such as Perch, Roach, Pike, etc. ♣

Fennel Pondweed can be recognized by its threadlike leaves. It thrives in nutrient-rich water and therefore became a dominant species between 1970 and 2000, when Lake Geneva was much more polluted than it is now.
Since the quality of the water in the lake has improved and is less saturated with nutrients, Fennel Pondweed has become less common, giving way to species which grow in clear and well-oxygenated water.
♣

When young, the Eurasian Watermilfoil has a green stem which becomes reddish in mature plants. Its leaves are branched with fine, feather-like divisions. This plant is abundant and widespread throughout Lake Geneva. ♣

The two varieties of waterweed are exotic aquatic plants, native to North America and frequently used in aquariums.

They began to appear in Lake Geneva at the beginning of the 1990s as the result of human intervention – people disposed of unwanted specimens by dumping them in the lake. Neither animals nor plants should ever be released into the wild in this way.

Elodea are low-growing plants, with whorls of 3. Western waterweed can be distinguished from Canadian waterweed by its thinner leaves which can sometimes be curved. The Canadian Elodea, on the other hand, has rounder, broader leaves.

These plants very rarely flower in Lake Geneva, but they can be seen in many of the lakeside ports.

There are several species of algae in Lake Geneva, but they are difficult to distinguish with the naked eye. These plants have a distinctively narrow and fragile structure, and typically form dense mats in deep water. Many animals use these mats as a place to lay their eggs, and they are also a useful foodstuff, especially for the Red-headed Pochard.
The return of Characeae to the lake after several years absence is a welcome indication of overall improvement in the quality of the water, and especially of a rise in the level of oxygenation.
♣

This magnificent pondweed is easily recognizable by its long, pointed, translucent leaves 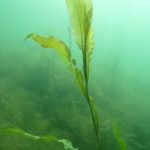 with distinctive netted veining. The flower spikes are also very long. This species is abundant in Lake Geneva, providing a good habitat and spawning ground for invertebrates and fish. 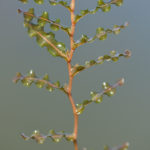 Curled Pondweed has long, oval leaves with finely toothed edges that are wavy or curled, as the name suggests. The species is widespread in Lake Geneva where it grows in calm waters, rich in nutrients. 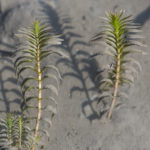 Close-leaved Pondweed has thickly leaved stems surrounded by elongated leaves one to two centimeters long growing in opposed pairs. It thrives in oligotrophic waters, which are poor in nutrients. Due to the improved oxygenation and transparency of Lake Geneva, this species is therefore expanding its range. 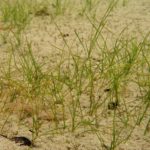 Horned Pondweed has the same type of threadlike leaves as Fennel Pondweed, but the placement and appearance of its flowers is different. They grow at the base of the leaves, against the stems.

Fertilization of the Marsh Zannichellia takes place underwater and the flowering period is from June to August.