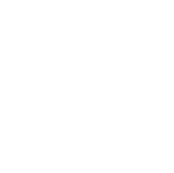 The birds of Lake Geneva

The birds of Lake Geneva can be divided into several large groups. Certain species, such as mallards and coots, are found here throughout the year. Others only visit the lake during specific seasons. Like many Alpine lakes, Lake Geneva plays a key role in the migration of European birds. Whether it is a landing-stage during the autumn or spring migrations, a resting-place in winter, or a site for reproduction in the spring and summer, each time of year has its own interest. For certain ‘common’ species, the local residents are joined in November by a large Scandinavian contingent which overwinters on the lake.

Not all the lake birds are ducks! They can be divided into several large groups (a non-exhaustive list). The duck family (surface or diving ducks), the gull family, the sandpiper family, (waders), the grebe family and the coots, each with their own physical characteristics.

Waterfowl are high in the food chain. Their presence is thus directly affected by their natural environment. They also regulate species further down the chain. The diets of waterfowl are very varied: they include insect-eaters, herbivores, and fish-eaters.

Waterfowl have developed a number of morphological adaptations. Some of these are found in the majority of aquatic species, like the protective membrane which covers the eye once the head is underwater, while others are directly related to diet.

Let ‘s begin with the feet. These may or may not have webs and can be situated at the back of the body or more centrally. Feet which are at the rear improve underwater propulsion, while feet situated more in the middle section of the body are better adapted to species which walk on land.

The form of the beak also varies depending on the bird’s diet, and how it feeds. Fish-eaters have long, pointed beaks, while herbivores have flat beaks and birds which eat molluscs have small, curved beaks. 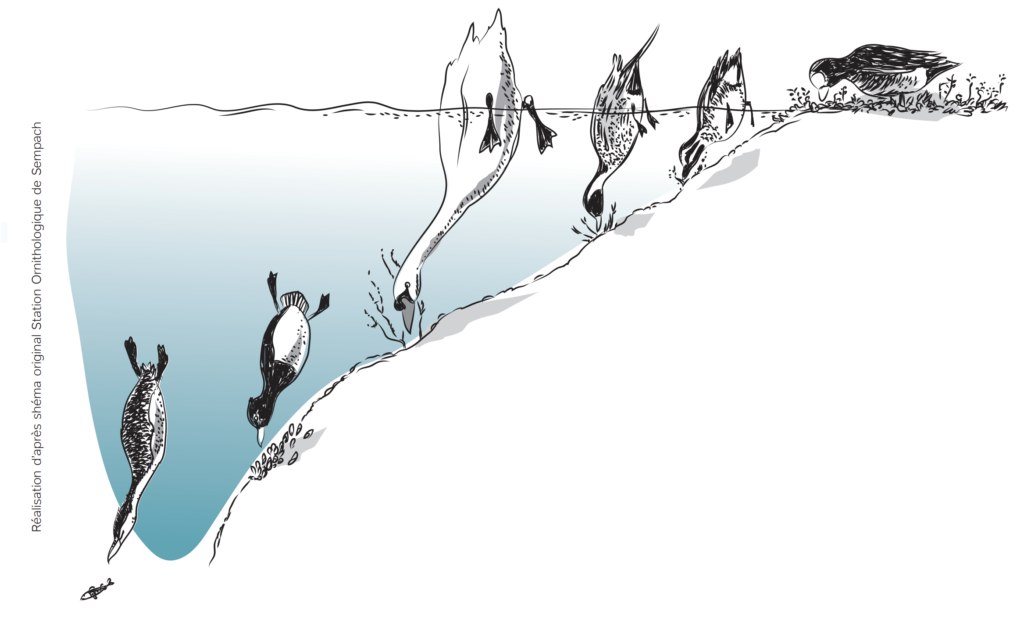 Plumage also plays a vital role for waterfowl. In most bird species, the feathers consist of two different sections. The base is fluffy, while the upper part is watertight, allowing waterfowl to stay on the surface without ever becoming cold. However, certain species of aquatic birds, like the great cormorant, do not have waterproof plumage. Having feathers which soak up water helps these diving birds to go deeper, and faster, in search of fish. This adaptation has both an upside and a downside: for example, cormorants need to leave the water at regular intervals to dry their feathers. Unlike some types of ducks or gulls which sleep in groups on the water, cormorants spend the night perched in trees along the shoreline or on the banks of watercourses.

The nuptial dance of the crested grebe provides a real lakeside show!
Grebes normally nest in 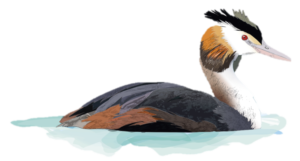 reed beds.
In recent years, aquatic plants have colonised the ports of Lake Geneva, allowing a number of species normally found in lagoons to establish themselves in the newly calm waters. The crested grebe has made the most of these quiet spaces, using the moorings of the boats to build their nests. In natural environments, these floating nests are hooked onto a reed or some other vegetation in the water. In the ports, slack moorings replace the vegetation. Relationships between the crested grebes and the users of the port are not always friendly!

Grebes are fish-eating birds, their sleek bodies perfectly designed for hunting underwater. In the spring, their mating displays are spectacular. After the season is over, the grebe loses its nuptial plumage which is replaced by more sober greyish-white feathers.♣ 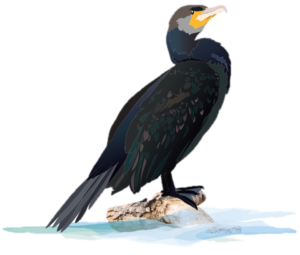 A new arrival in Lake Geneva, the great cormorant has not been welcomed by everyone. Voracious fish-eaters, able to consume up to half a kilo of fish per day, the cormorants gather in large groups to hunt. They are easy to spot on the jetties where they have a characteristic way of stretching out their wings when resting. Cormorants have feathers which are not water-repellent, allowing them to absorb water which makes diving easier. ♣
Observation period: All year round, with the largest groups visible in winter.

The grey heron returned to Lake Geneva in the 1990s, having previously become much less common in the region. This fish-eating wader is often found close to ports or river-mouths. Perched on its long legs, it can be recognised by its grey body and large yellow beak. The heads of the adults sport a small black crest.
Observation period: All year round, with the largest groups visible in winter. 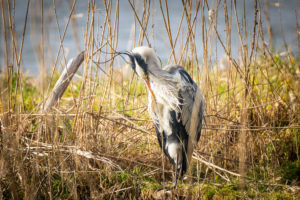 Originally from Asia, swans were introduced to Lake Geneva in 1837 and subsequently colonised the shoreline. Male and female can be identified by the knob on the bill, more prominent in the male and flatter in the female.
The swan feeds by swinging its body sideways and using its long neck to graze on the aquatic plants below the surface of the water.♣

Observation period: All year round

The mallard is unmissable on Lake Geneva. In the breeding season, (winter 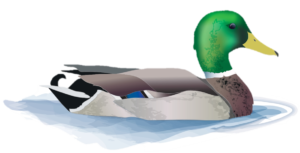 and spring), the male can easily be spotted by his green head. The female is more discreet, but can be identified by the shimmering blue streak on the wing. Once the season is over, the male reverts to a duller plumage, similar to that of the

female. However, they can still be told apart as the male’s feathers are slightly darker and his beak is a stronger shade of yellow.♣

Slightly smaller than its cousin the mallard, the gadwall takes its French name, Canard chipeau, from its tendency to purloin (chiper) food from other ducks. This habit explains why it is often found close to groups of coots and red-crested pochard.

The male’s plumage is grey with delicate stripes and a white flash on the wing. The white flash is also seen on the female and is a good way to recognise the Gadwall. ♣ 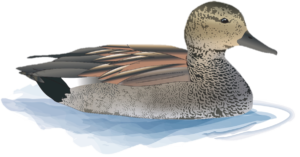 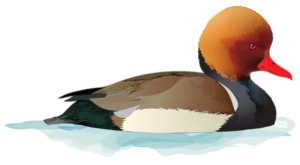 Not long ago, it was still unusual to see a red-crested pochard on Lake Geneva. This beautiful red-headed duck has an unusual migration pattern, flying from east to west and not north to south like most birds. The recent appearance of the red-crested pochard is not a random development but is due to the improvement in the quality of the lake’s water as a result of the ban on phosphates in laundry powder, among other positive developments. Because of this change, the range of aquatic plants has grown and types of waterweed such as characeae which thrive in nutrient-poor waters,

have been able to colonise the area. These water weeds are the favourite food of red-crested pochards. The species is therefore a good bioindicator of the evolving quality of the water. Initially only a winter visitor, the red-crested pochard now nests in Lake Geneva. 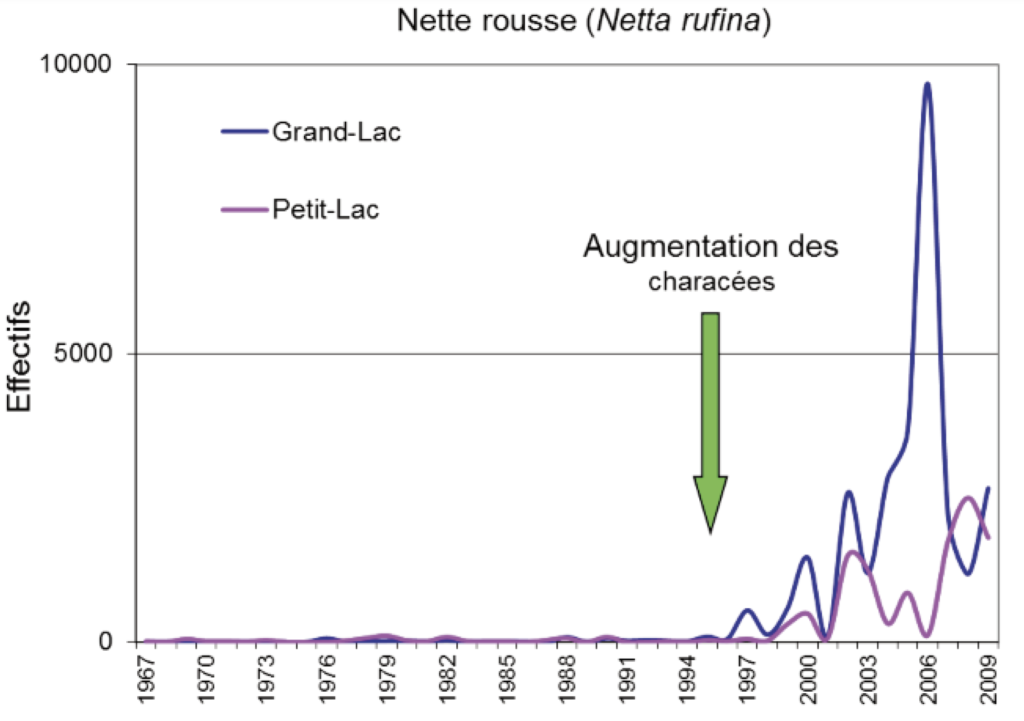 The tufted duck nests in Siberia and migrates to western Europe for the winter. The appearance of tufted ducks in Lake Geneva is directly related to the arrival of a foodstuff they favour, the zebra mussel. Tufted ducks also started to nest in this area some years ago. In the

overwintering flocks, the tufted duck is often found with pochards and the rarer ferruginous duck. All three varieties are nocturnal, resting during the day and fishing from dusk onwards. ♣

The ferruginous duck is a winter visitor from Siberia. It was still a rarity at the start of the 21st century, but this duck is now present around Lake Geneva, albeit in small numbers, following a change in the migratory flight paths of the species. Overwintering groups return to the same site in successive winters. Like the tufted duck, the ferruginous duck is active mainly at night. 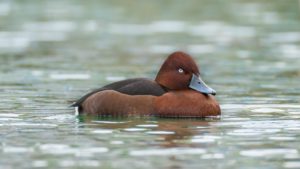 Often mistaken for the crested grebe, the goosander has a longer, bulkier body. The female is grey, with a reddish-brown quiff. The male has a black head and back and white flanks. Goosanders are fish-eaters: their feet are situated quite far back, making for powerful underwater propulsion.
Goosanders nest in holes in old trees near the lake. Once the eggs hatch, the fledglings jump out of the nest before entering the lake. ♣

It’s not a moorhen! Completely black with a silvery sheen, the coot has a white bill with a frontal shield which is also white. Coots dive under the surface to feed on water-weed and small molluscs. ♣ 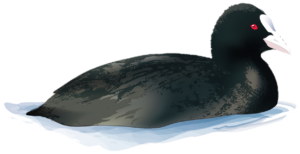 Moorhens are mainly found in reed beds, but can also be seen in the lake ports. Mainly ground-dwelling, they patrol the jetties and the lake shores in search of molluscs and other large invertebrates. In all phases of plumage, moorhens can be recognised by a horizontal white line on the flank. The adults also have a characteristic yellow and red beak. ♣ 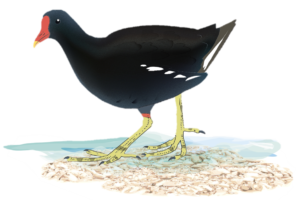 Observation period: All year round, with the largest groups visible in winter in ports. 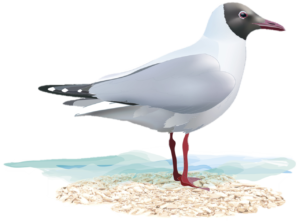 Black-headed gulls are most often seen near beaches, ports and urban centres. They feed on worms, insects, and other small creatures found in aquatic plants. It’s easy to spot them all year round, but the pèoulation around Lake Geneva is at its largest in the winter season. The rare nesting couples in the lake area are mainly settled around the delta of the Dranse (Thonon), and at the Grangettes reserve (Valais). ♣
Observation period: All year round, with the largest groups visible in winter. 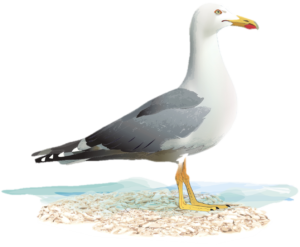 Considerably larger than the black-headed gull, the yellow-legged gull is a Mediterranean bird which was first seen on Lake Geneva in the 1960’s. Well-adapted to human presence, this variety is increasingly widespread in the lake area. Nesting on jetties, boats, and even on city rooftops, the yellow-legged gull brings a little touch of the sea to the lakeside ports with its long and plaintive cry. ♣

Observation period: All year round

This small wader can be found on the lake all year round. Sometimes called Hochequeue, or wagtail, in French, the common sandpiper patrols the shoreline in search of small worms. In the drainage basin of the lake, this species nests in the upper Rhone valley where there are alluvial zones suitable for nesting. During migration periods or in winter, the common sandpiper can be found all around the lake making the most of the calm jetties. 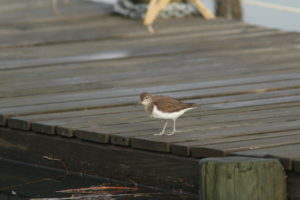 In winter, you can sometimes see a turquoise flash appear between the docked boats in the lakeside ports. It’s a kingfisher. This small bird nests in the cliffs and steep banks next to bodies of water. Although certain couples do nest on the shores of Lake Geneva, in general they prefer riverbanks. 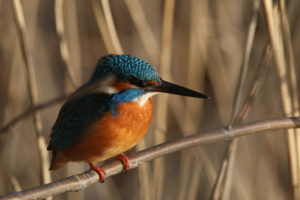 You can find further information on the birds of Lake Geneva in numbers : 51, 71, 96 et 109 of our quarterly publication Lémaniques as well as in our information leaflets,  our infographics or in our weekly newsflash Info in 60 seconds.